The story of solidarity, gratitude and “a drop on a hot plate”… 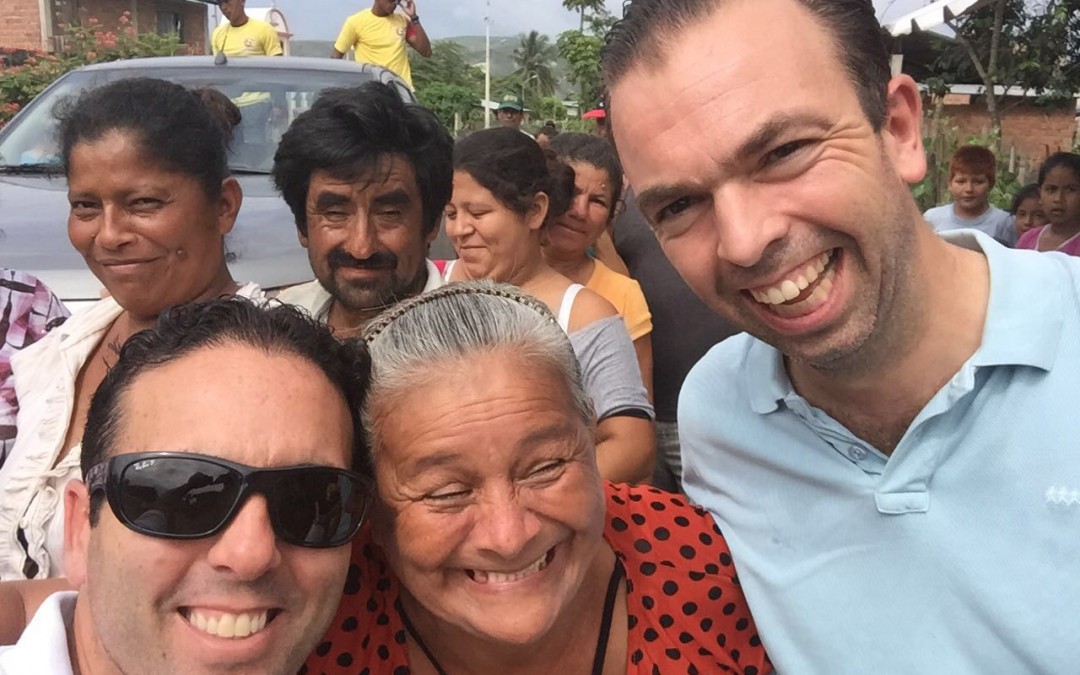 Last Sunday, 17 April 2016, driving to Amsterdam to catch my flight to Guayaquil, Ecuador, for a 3 week deep dive into our local projects, the economic situation of the country and potential new opportunities, Twitter alerted me on a huge earthquake (7.8 on the scale of Richter) that had just hit the country.

A few WhatsApp messages later, connecting with our local partner, Pablo Campana, quickly made it clear that there were, at that moment, no reasons to cancel my trip. The country was in deep shock, but the main damage was in Pedernales and Manta, the coastal area some 200km from Guayaquil.

Upon arrival it was very strange to receive continuous updates on the rising number of casualties and the mounting estimate of the damages whilst driving through the streets of Guayaquil and barely seeing anything. Apart from one of the heavier aftershocks on Sunday night, I must admit I also didn’t feel any of the “terremotos”. But, for an entire week, it was obviously the talk-of-the-town and you felt a huge degree of nervousness (for those who catch a bit of Spanish: http://www.eluniverso.com/noticias/2016/04/23/nota/5538984/sismos-causan-nerviosismo-alteran-cotidianidad-ciudad ). When on Wednesday afternoon there was a new aftershock of 5.9, our office, as many others in the city, was evacuated. There was no damage but the stress in town mounted further. 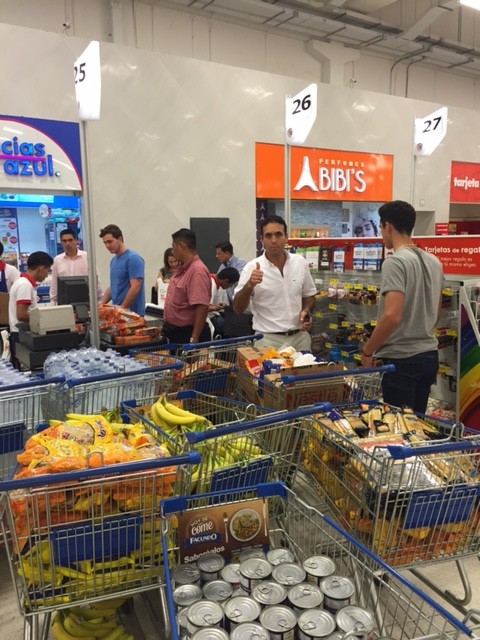 of the country. On Friday night, I went with Pablo and his family to a local supermarket to buy water and food (canned tuna, pasta, bananas, biscuits, …) to prepare 250 food-packs that we would deliver the day after. It gave rise to an incredible solidarity. People spontaneously came to assist us to pack this huge amount of food, boxes were gathered, everything was carried to our cars,…

Saturday morning, we took off for a 3 hour drive to Crusita, a small town near Manta, that – we were informed-  was heavily impacted by the earthquake. It was, ironic enough, a breath-taking drive through a magnificent country and it was only a few kilometres before Crusita that we started seeing damaged houses on our way. Upon arrival, we addressed the local “bomberos” who proved extremely well organised. We were diverted to some kind of a “safehouse”, a contaminated word nowadays, where we could prepare our 250 bags and discuss a strategy to provide them to the most affected zone. Instantly, not less than 14 volunteers arrived in the safehouse to help. Once again, if the country needed unification, the earthquake created this: a level of solidarity, never before witnessed in my life. Within a few moments, our truck was filled with 250 bags and 2 volunteers brought us to the most affected zones where we could distribute the packages under the one-package-per-family-rule. 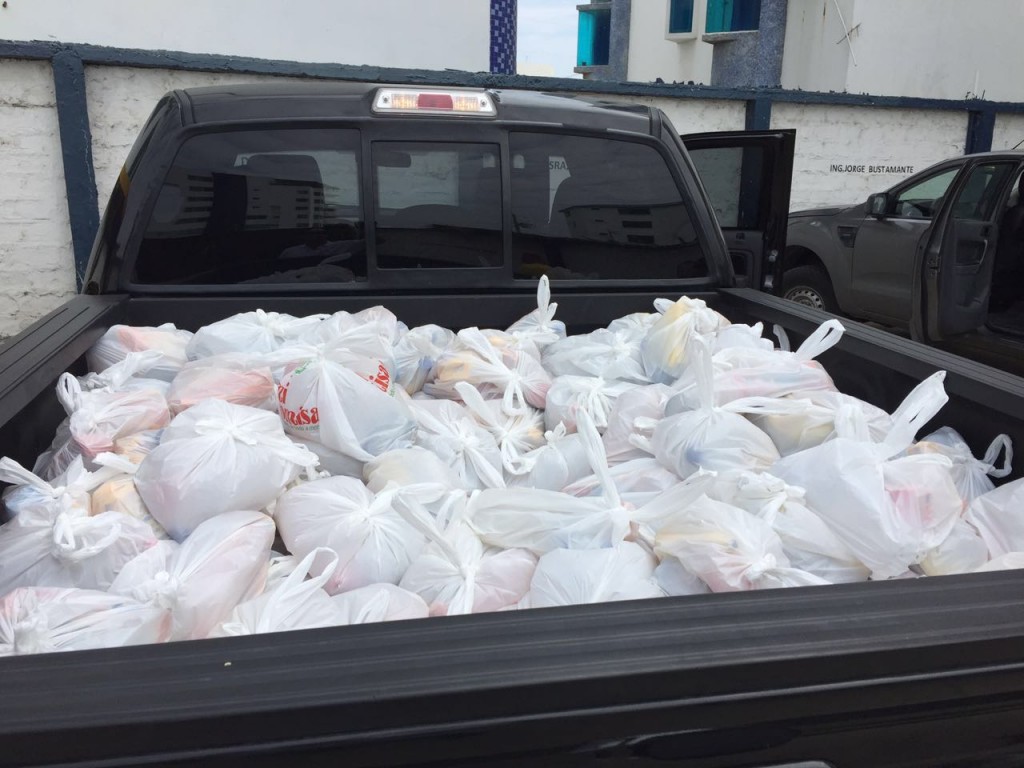 We witnessed family-tragedies, families that lost their relatives, houses, that were living under shelters. No electricity, no fresh water, no food. But we could witness an amazing level of optimism and gratitude. Families wanted to show the inside of what was left of their houses, they wanted pictures, hugs,…  And they gave back. They gave back the most beautiful smiles that I have ever seen. I realise it may sound “cheesy”, but it was heart-filling. 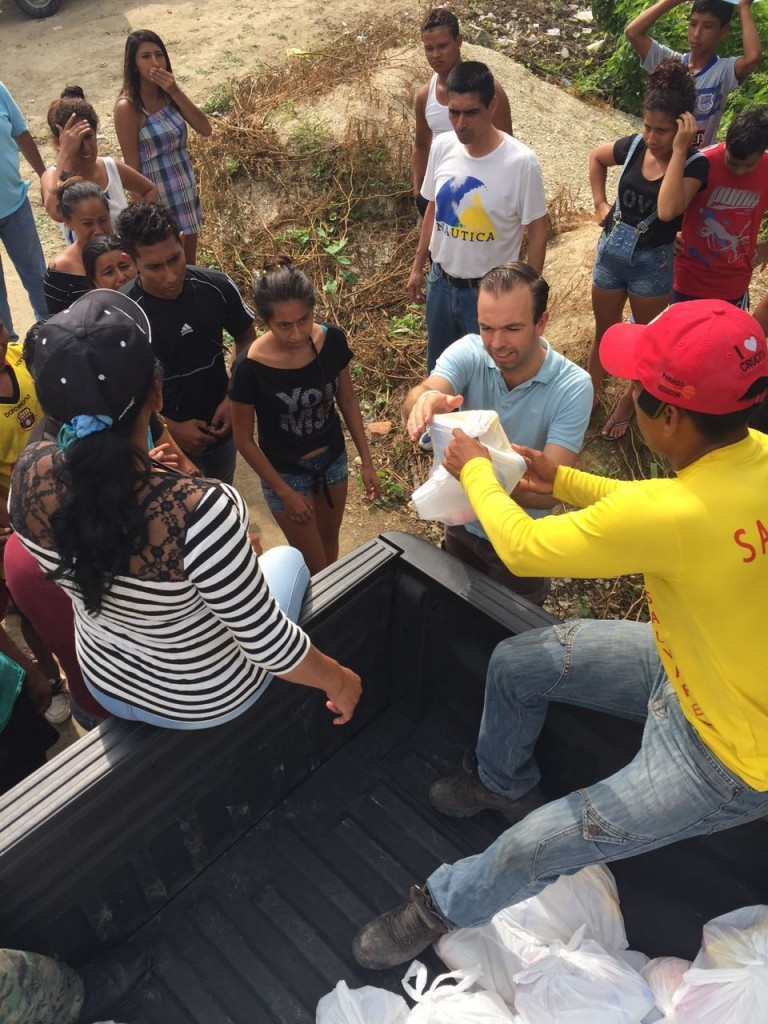 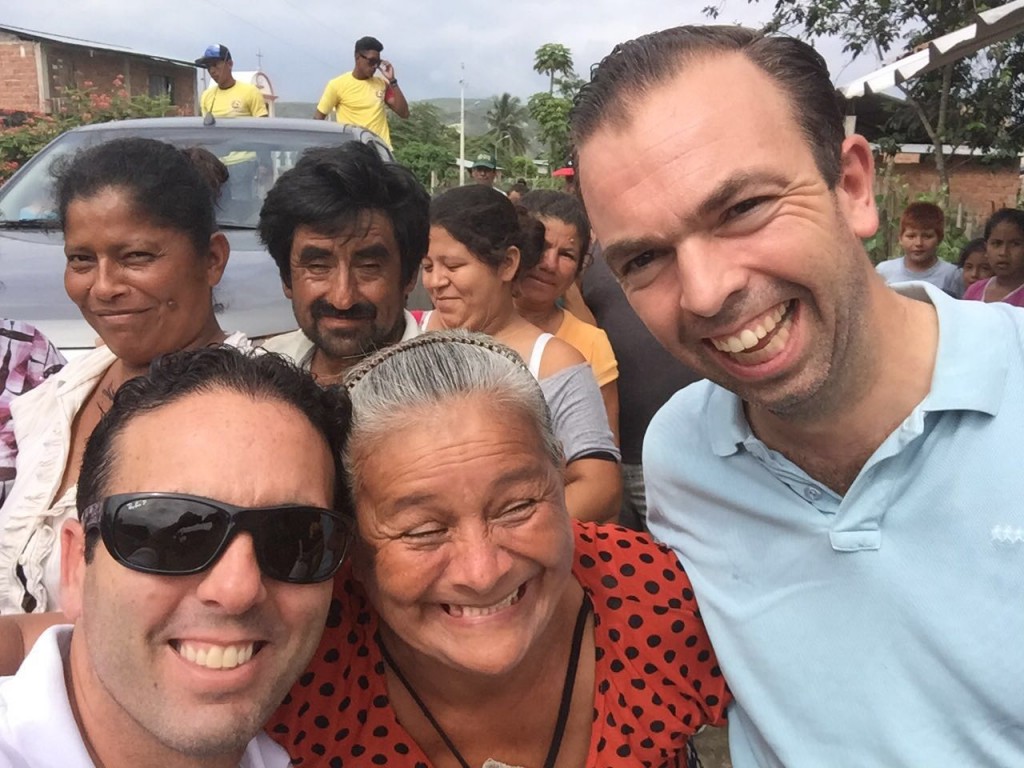 From Crusita, we continued our journey to Manta, the second most populated city in the province of Manabi. What we saw there cannot be described in words or even pictures. It was a warzone. We drove up to the community of Tarqui and I’ll leave the pictures to speak for themselves. 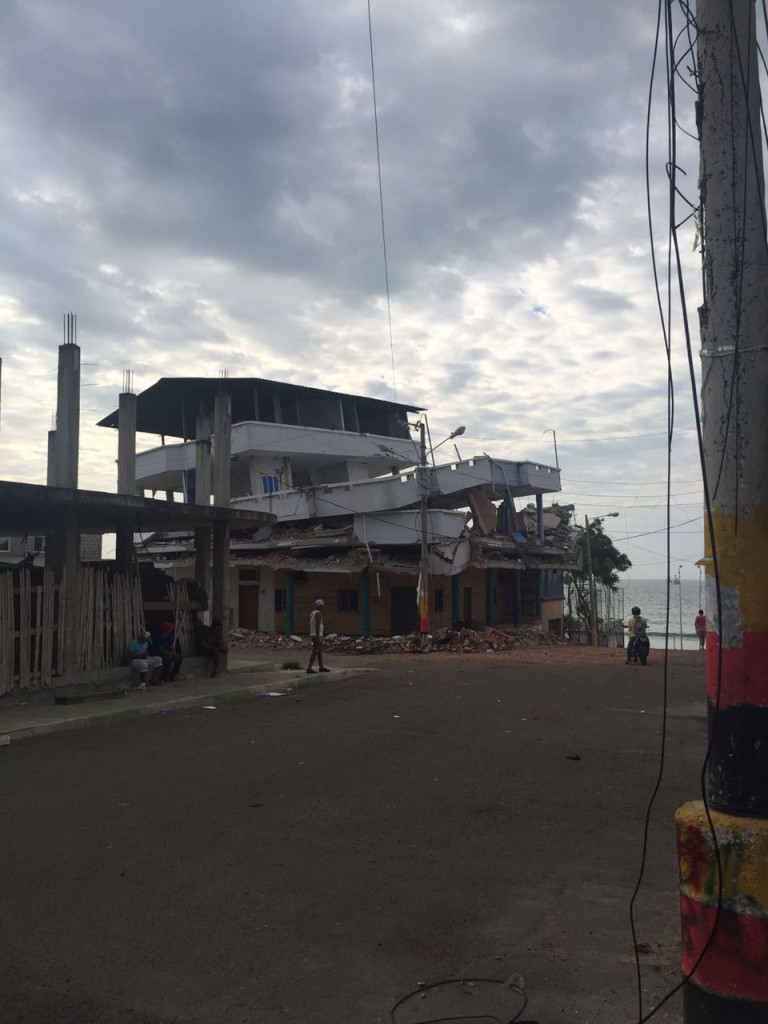 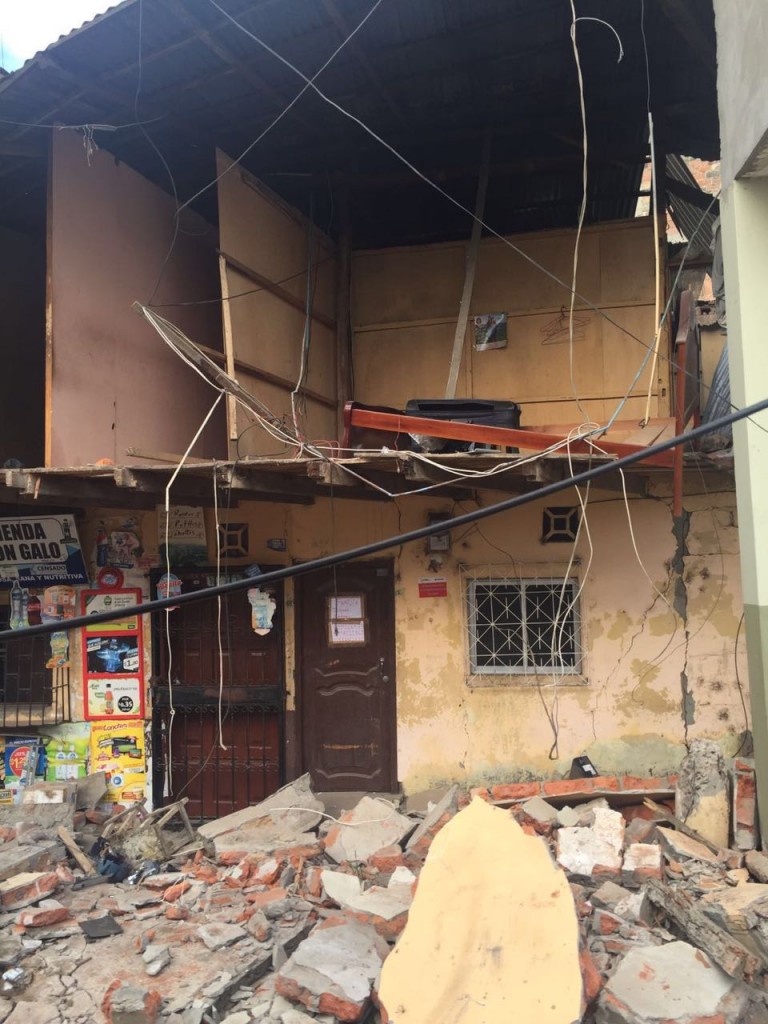 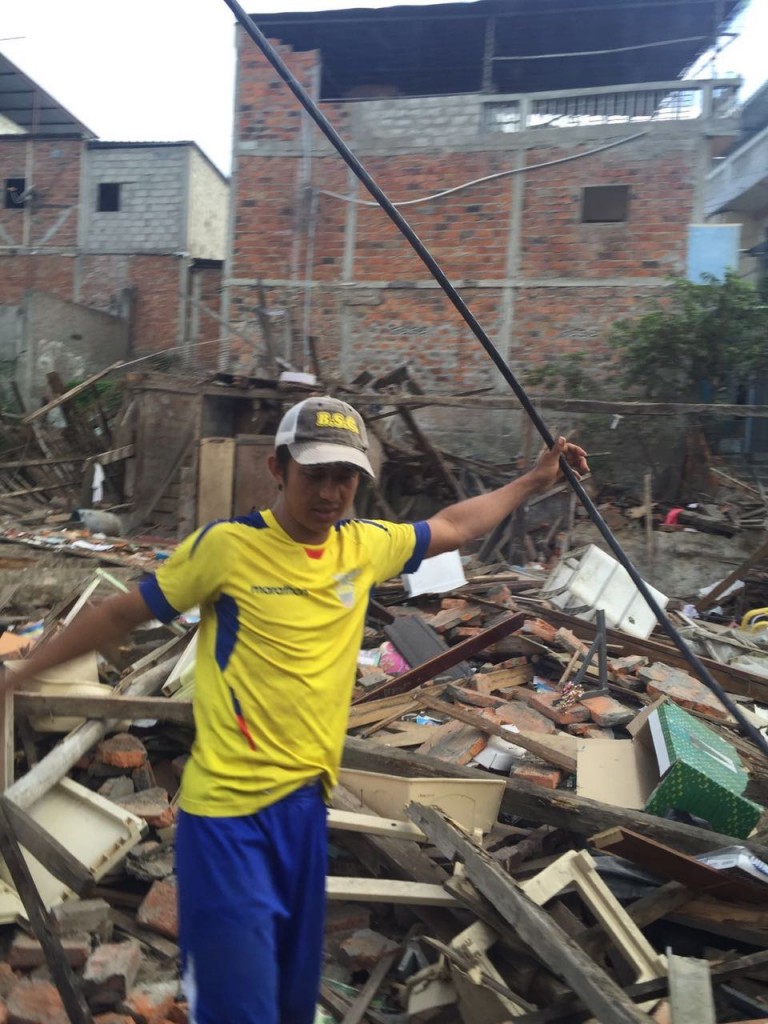 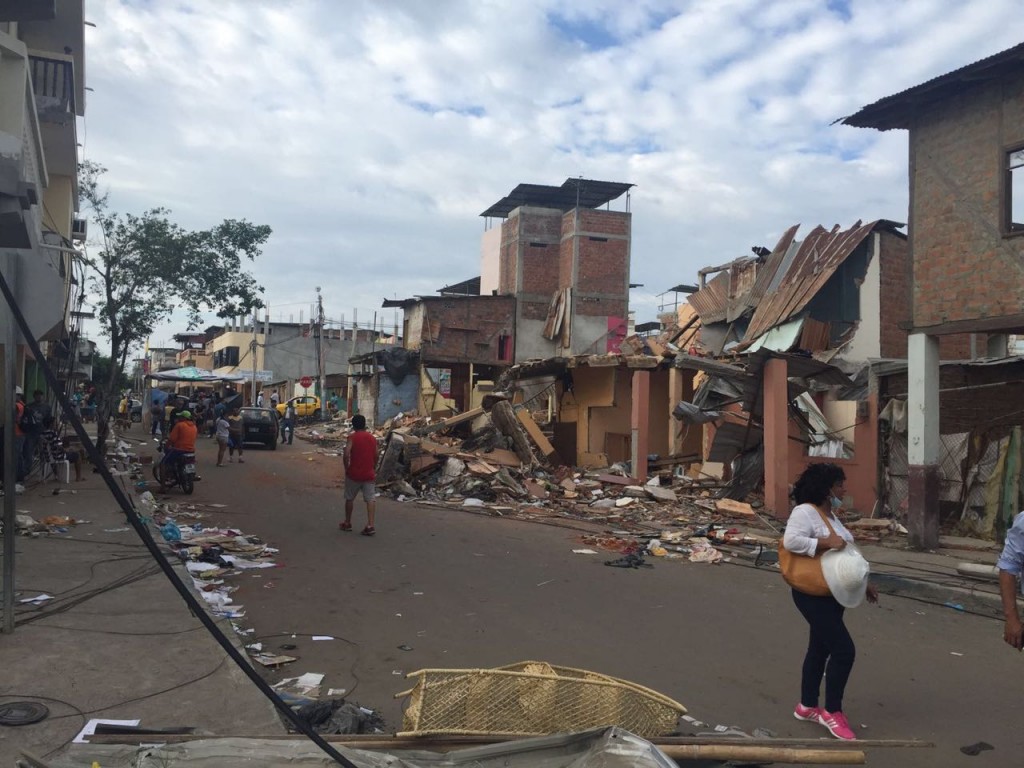 Between all of this drama, accompanied by a dreadful smell that, unfortunately, I can only describe as the smell of death, again we found an army of volunteers. People working there for almost a week. Wearing mouth-masks to protect themselves for diseases and epidemics. Helping their previous neighbours, helping people they have never seen before. And all this in a serene and coordinated way. And grateful for the few packages that we had left, the gallons of water and the watermelons that were carefully allocated to families with small children. 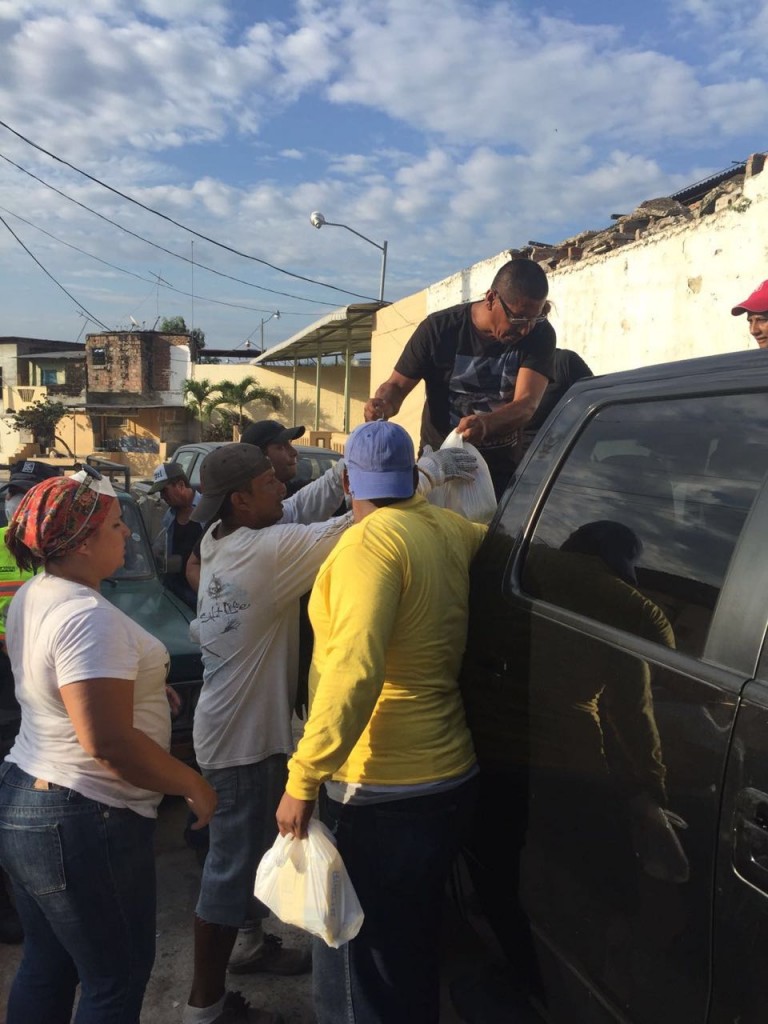 I realize the story is long, probably too long for a blog, but I believe this situation deserves some attention and a realistic story on the local situation. The official death toll is now 654, but the “real estimate” is that more than 2000 people have been killed by this tragedy. The local government is trying to react in an efficient way (smartly and temporarily increasing taxes, granting benefits to families that temporarily house other people, speeding up social housing projects, …). But it will take years to recover from this earthquake and it certainly does not come at a good time for a country already heavily affected by cheap oil and the expensive US dollar that puts them in a less competitive position to their neighbouring countries, Colombia and Peru.

With the solidarity and the agility I have witnessed yesterday, I am confident that the country will come out stronger and more united than ever before. In the meanwhile, it felt “good” to assist a tiny little bit yesterday, but the most important contribution to the country we can make is to further support our local investments. Whilst our focus obviously is on providing solid returns for our investors, we calculated yesterday that 1 of the buildings we are developing here, gives direct jobs to approximately 250 people and indirectly benefits to some 1 000 working people. If that allows them to support the same number of families, our local presence will prove more than just “a drop on a hot plate”…

In the meanwhile, local volunteers can use your (financial) support here as well. I realize there is Nepal, there is cancer, there are local dramas, there is a lot of inequality, but if you want to contribute to this beautiful country, I believe the works Father Guy Mennen is doing here with Belgian students, deserve your support. He also was in Crusita and made this video to be a warm appeal to your contributions: https://youtu.be/Kww_uQBe83c