Carnival through the eyes of a ‘gringo’ ! 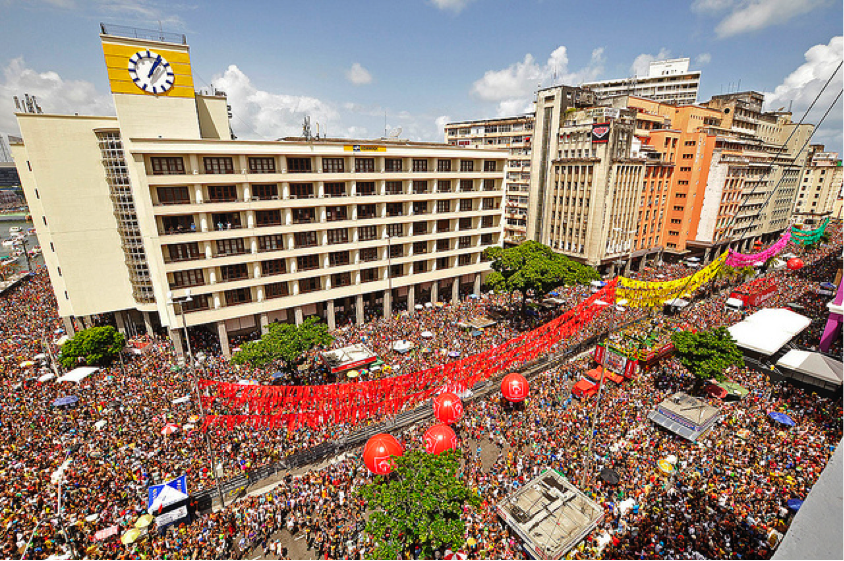 Even though Carnival-week is not to officially kick off until next weekend, the Brazilians no longer seemed to be able to control themselves and switched on the pre-carnival – what’s in a name – past weekend.

Not sure what to expect, I made sure to be right at the epicentre of the whole happening. Right from the start, my first mistake became clear: one does not wear long pants and classic shoes to the carnival! The reason for this became painfully apparent after the first minutes – over 30 degrees under a clear sky and a crowd like I had never seen before – and once again after about half an hour when it started raining cats and dogs. Luckily, this weather passed rather quickly and temperatures were better to stomach for a ‘gringo’ (that is what Brazilians call foreigners like myself), after which I could enjoy the rest of the show to the fullest even though it looked nothing like what I had in mind when coming to the carnival.

No big parades or grotesque floats here during the pre-carnival, but Bloco’s! Basically, the idea of a Bloco is that people walk around a moving truck where bands are playing live music and follow it until they feel like checking out the next Bloco. Paulistas love it, and so did I! We were following the one of  ‘Sargento do Pimenta’ (video), where a bunch of enthusiastic youths were covering The Beatles. Surprisingly, everyone seemed to know the lyrics and was singing along in between taking sips from their caipirinha or beer. But what stroke me the most was that no matter what age or social group you were from, everybody was celebrating with each other as if there was no tomorrow.

As the day slowly turned night, more and more people started to get off the streets and flocked into one of the many restaurants and bars. Here the festivities just continued with more live bands playing both classics and local sing-alongs. Whether you were eating or just having a drink, once the soul train passed by, you were ‘getting on board’, just like everybody else! Personally, I’m not too big of a dancer and usually stick close to the bar, but here I sure did participate and had the time of my life!

Waking up in the morning, I finally understood the big fuzz about carnival in Brazil and why people want to see it last as long as possible. Sure enough I will be heading out for the official carnival this weekend, be it better prepared in shorts and havaianas…